↓
Home→Education→From the Archive: Introduction
to a Community Discussion Guide

This is the Introduction to a community Discussion Guide  for West Virginia: A Film History 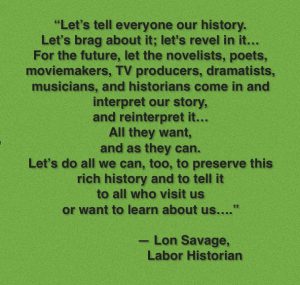 As Lon Savage suggests, there are many wonderful reasons for West Virginians — or other Americans, for that matter — to take interest in history of the Mountain State. Our state’s story is filled with rich and dramatic events, involving characters as fascinating as any created in fiction. The richness and excitement of our state’s history are what carried the creation of West Virginia: A Film History and this, the film’s Discussion Guide.

In this book, you will find original material that defines moments in our state’s history. The material carries understanding of issues and events that brought members of various communities (ethnic, economic, regional, social, etc.) into contact with others. In the boxes, you will find references to the exact sections of West Virginia: A Film History where these events are presented.

Each section of this guide is followed by questions that can be considered and discussed by your group. (You may also come up with discussion points of your own regarding the film or its subjects.) At the end, a bibliography makes suggestions for more reading in West Virginia history. Generally, we hope to encourage people to discuss questions of how and why the West Virginians of a particular time and place may have responded to their circumstances as they did.

Like the film, the discussion guide has four sections, each with a different theme:

Part I examines some of the ideas and attitudes held by early Virginians compared with those of native Americans.

Part II deals with events surrounding West Virginia statehood and the Civil War. The themes include: slavery, sectional differences between Eastern and Western Virginia, Northern and Southern differences, and the war in West Virginia.

Part III discusses the arrival of industrial development and technology in West Virginia, a discussion that is especially relevant today. Certainly turn-of-the-century West Virginians asked themselves about the benefits of industrialism, just as we are seeking answers about the value of our growing “computer culture.” This section allows us to enter into a discussion of the advantages and disadvantages of fast-paced technological and economic change.

Part IV examines the positions of industry, labor, and government during the mine wars of the 1920s and thereafter. We will look at the role of the local authorities, of labor officials, and national political figures as they address work and living conditions in West Virginia. This form of public discussion is the essence of the humanities. It is the examination of a “text” – in this case, a film and Discussion Guide – that leads us to consider our individual and community roles within the larger tapestry of state and national history. The humanities consider the human condition by using the texts of history, literature, philosophy, and religion. Shakespeare’s plays, Appalachian folk tales, Thomas Jefferson’s letters, miners’ reminiscences, Emily Dickinson’s poetry, and Mother Jones’s speeches… all are texts that give us a glimpse of where we’ve been, how we got here, how our experiences are vastly different or surprisingly similar and, possibly, of where we are going. At the West Virginia Humanities Council, we work to provide these opportunities for West Virginians. Hence, we developed this study guide.

Vital to our study of the humanities – to our understanding of our state and its history – is the participation of West Virginians themselves. Of extreme importance to these discussions are the state’s community historians, the genealogical researchers, the teachers and librarians who ferret out and share the stories of historical characters and the places in which they lived. The local historians and the communities they serve comprise the principal audience which we, at the Humanities Council, are trying to reach with West Virginia: A Film History and this Companion Guide. The guide, in fact, was developed with substantial assistance from community researchers, working in partnership with history educators and professional archivists. It was developed to offer a resource to those who share an interest in our state’s history and who want to discuss issues presented by West Virginia: A Film History. The Humanities Council hopes that West Virginia: A Film History and this Discussion Guide will help local groups arrive at a better understanding of the questions and issues that have helped shape and distinguish West Virginia and its people. Further we hope this examination will encourage West Virginians, as Lon Savage suggests, to “revel in,” “brag about,” and “tell everyone our history.”

Some years ago, here in Berlin, I had the chance to ask a question of American performance artist Laurie Anderson. This was in March 2017, just after Donald Trump took office as the American president. Ms. Anderson had been telling … END_OF_DOCUMENT_TOKEN_TO_BE_REPLACED

NOVEMBER 24, 2020 — Market conditions in the United States make it impossible for a small ‘niche’ publisher to produce books at a cost and profit that make it worth trying. Once shipping thousands of books per year — titles … END_OF_DOCUMENT_TOKEN_TO_BE_REPLACED

Reading about events in the United States today, I’m reminded of 1998, when I was working very hard to sell John Alexander Williams’ “West Virginia: A History for Beginners” to schools in the state of West Virginia. As the book’s publisher … END_OF_DOCUMENT_TOKEN_TO_BE_REPLACED

END_OF_DOCUMENT_TOKEN_TO_BE_REPLACED

The Revolution Will Not Be Shared I In this age of Trumpish tyrants, too many of us live and work in places where someone else — boss or client — is neither partner nor comrade, but our “king.” Where we’re … END_OF_DOCUMENT_TOKEN_TO_BE_REPLACED

I just received a message from a longtime Berlin pal, nonfiction filmmaker Rick Minnich, who always seems to be working on something cool and interesting. Rick has lost a friend of his own in March 2020, a 100-year-old fellow in … END_OF_DOCUMENT_TOKEN_TO_BE_REPLACED

I’m currently reading Christopher Clark’s book with the whopping title: Time and Power: Visions of History in German Politics from the Thirty Years’ War to the Third Reich. In it, Clark discusses how the Nazis “changed history” first by changing … END_OF_DOCUMENT_TOKEN_TO_BE_REPLACED

What people might want to remember today is that the US Justice Department has convicted the sitting president’s closest associates — including his attorney and his former election campaign manager — as criminals. They are sitting in prison for financial … END_OF_DOCUMENT_TOKEN_TO_BE_REPLACED

Saturday, Oct. 26, 2019 — I was talking to a dear, old friend of mine some time ago. She was thinking-out-loud about her current work — for a US food processing giant — and comparing it to the work she … END_OF_DOCUMENT_TOKEN_TO_BE_REPLACED