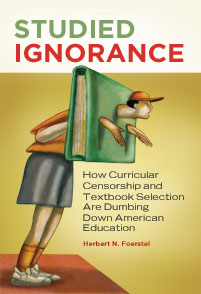 I was quickly made aware of the fact that there were two kinds of parents buying textbooks at this event. Both types were home-schooling their children, moved by their own disillusion with state public schools. The first kind of parent came from a mostly rural tradition of  Christian fundamentalism. Such parents were the earliest, most passionate combatants of the American “culture wars,” people who had launched the remarkable textbook battles of the mid-1970s — most notably in Kanawha County, West Virginia.

Coming largely from educated, middle-class families, members of the second group wanted their kids to receive the kind of education they’d often enjoyed in college, sharing the excitement of instructors like Howard Zinn (“A People’s History of the United States”), who made new discoveries and came up with new interpretations of history that captured us, made such study seem more relevant to the times….. (It was easy to see differences of class and educational background between the two groups.)

The opening chapters of our eighth-grade textbook, “West Virginia: A History for Beginners,” explored archeological studies of a large, mysterious “Indian Burial Mound” in Ohio County, West Virginia. In these chapters, John Alexander Williams examines the changing interpretations of history alongside changes in archeological investigation, beginning in 1838, when the Native American grave mound was first opened by a local landowner. Williams uses the changing story of the mound, in other words, to teach the contemporary social sciences — how scientists gather evidence, make inferences from that evidence, and interpret the results of their study. In a word, the chapter teaches the intellectual tools of archeologists (also used by police detectives and other investigators of historical truth).

At the 1998 conference, a woman stood at my table and asked to buy a copy of Williams’ history book, written and published (and approved by the state) for eighth-grade West Virginia Studies classes. I could see that this woman was one of the fundamentalist Christian home-schooling parents and I “plunged in,” asking her what prompted her to buy our book.

“We teach the study of archeology,” I told her. “Doesn’t that go against your fundamentalist Christian ideas (of ‘creation science’)?”

I nodded, not knowing what to say. (I was glad to be able to sell Williams’ book at all.) Never did I believe, however, that this woman’s way of thinking would feed a new, cynical growth-market of “faith-based” school materials — much less that these materials would become more widely circulated than our own. (Our own books are no longer in print and difficult to obtain.)

Today, I am left speechless by the fact that anti-science, anti-Enlightenment teaching — really, a genuinely anti-American curriculum — is being elevated by the president of the United States and his Department of Education. Once again, as I read that Donald Trump is criminalizing new historical research and teaching, I am left with nothing to say.

Some years ago, here in Berlin, I had the chance to ask a question of American performance artist Laurie Anderson. This was in March 2017, just after Donald Trump took office as the American president. Ms. Anderson had been telling … END_OF_DOCUMENT_TOKEN_TO_BE_REPLACED

NOVEMBER 24, 2020 — Market conditions in the United States make it impossible for a small ‘niche’ publisher to produce books at a cost and profit that make it worth trying. Once shipping thousands of books per year — titles … END_OF_DOCUMENT_TOKEN_TO_BE_REPLACED

Reading about events in the United States today, I’m reminded of 1998, when I was working very hard to sell John Alexander Williams’ “West Virginia: A History for Beginners” to schools in the state of West Virginia. As the book’s publisher … END_OF_DOCUMENT_TOKEN_TO_BE_REPLACED

END_OF_DOCUMENT_TOKEN_TO_BE_REPLACED

The Revolution Will Not Be Shared I In this age of Trumpish tyrants, too many of us live and work in places where someone else — boss or client — is neither partner nor comrade, but our “king.” Where we’re … END_OF_DOCUMENT_TOKEN_TO_BE_REPLACED

I just received a message from a longtime Berlin pal, nonfiction filmmaker Rick Minnich, who always seems to be working on something cool and interesting. Rick has lost a friend of his own in March 2020, a 100-year-old fellow in … END_OF_DOCUMENT_TOKEN_TO_BE_REPLACED

I’m currently reading Christopher Clark’s book with the whopping title: Time and Power: Visions of History in German Politics from the Thirty Years’ War to the Third Reich. In it, Clark discusses how the Nazis “changed history” first by changing … END_OF_DOCUMENT_TOKEN_TO_BE_REPLACED

What people might want to remember today is that the US Justice Department has convicted the sitting president’s closest associates — including his attorney and his former election campaign manager — as criminals. They are sitting in prison for financial … END_OF_DOCUMENT_TOKEN_TO_BE_REPLACED

Saturday, Oct. 26, 2019 — I was talking to a dear, old friend of mine some time ago. She was thinking-out-loud about her current work — for a US food processing giant — and comparing it to the work she … END_OF_DOCUMENT_TOKEN_TO_BE_REPLACED