↓
Home→Berlin→Lessons from Germany’s Tucholsky:
‘Really listen: There is nothing there…’ 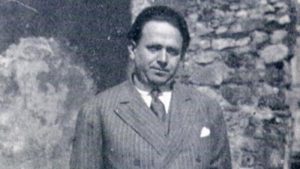 BERLIN (July 25, 2017) – My Internet feeds are buzzing with two items this news cycle: 1) US President Donald Trump yesterday ranted again about Democrats (somehow still in his sights as political enemies), this time before 32,000 young, mostly-male students in my native West Virginia; and 2) The strange rally of American youth struck many people as sharing the flavor of the nasty events staged by loyalists of German fascist dictator Adolf Hitler, whose speeches Trump reportedly once kept at his bedside.

Once again, we see both leaders — Trump and Hitler — overestimated as anything more than deranged showmen. In the interest of “equal time,” it seems like a good moment to remind American Boy Scouts about the work of German political humorist Kurt Tucholsky (1890–1935). Tucholsky died miserably in Sweden and had no buildings named after him, although there’s at least one street that bears his name today in Berlin — and rightfully so.

Finally, Tucholsky reports, “It was time for the Führer.” “I … stood, listening. I listened with my whole body….

Until he left Germany in 1930, Tucholsky wrote satirical newspaper columns, poking fun at political leaders who had failed to stand up to the fairly steady attacks of militant right-wing nationalists. Largely connected to the military, the violent nationalists rose slowly after the end of World War I, filling the gap left by the 1918 departure of the German king, Kaiser Wilhelm II.

In a nutshell, the well-off Social Democratic politicians of that time were more afraid of the left-wing Russian Revolution (October 1917) than they were of the angry and violent nationalists in their own army. Shots fired by the military, police and even quiet death squads during this time killed thousands of left-wing demonstrators and some high-profile left-wing leaders — several of whom happened to be Jews. Meanwhile, the anti-war and anti-nationalist Tucholsky kept using his typewriter to fight the loud, spitting promoters of “Germany First.”

In 1929, the Depression hit, and everything became that much easier for simple-minded arguments of angry, violent German right-wingers, boosting racism and fear in service to themselves and their new National Socialist (“Nazi”) Party. Tucholsky decided he could no longer live in Germany. He left his beloved Berlin in 1930, three years before Hitler took power. He became a refugee in Sweden where, not speaking the language, he felt like a writer in exile. 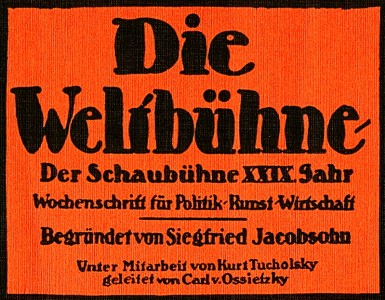 He abandoned his work at the left-wing newspaper Weltbühne, prompting him to write to a friend: “Don’t mention this to anyone, but the whole thing doesn’t interest me anymore. I am fed up with it. I don’t intend to join the Catholics any more than I would go to Goebbels. (I really don’t plan) to do anything wonderful at all.”

“You have no idea what our country looks like from outside. A bunch of depressed, depressive and fatiguing madmen who are 100% wrong, as individuals and collectively.”

Now, let’s take a look at Tucholsky’s remarkable impression of Hitler. He heard the Fürher on the radio. Tucholsky calls him “Ah-dof” (German for “Oh-dumbass”). Sometimes, he simply derides him as “Edgar.”

“Goering spoke first,” Tucholsky writes. He calls the future Gestapo leader “an evil bloodthirsty old woman who shrieked away at the people, whipping them into a murderous mood. Shocking and disgusting. Then (propaganda minister) Goebbeles (sic) then lots of Heils and roaring, marching and music and a bit pause.”

Finally, Tucholsky reports, “It was time for the Führer.”

“I walked a couple of meters from the (radio), set myself and stood, listening. I listened with my whole body. And then something quite odd happened: Nothing.

“The voice isn’t unsympathetic — not half of what you’d think. It smells a bit of the seat of the pants. It smells of man. Unappetizing, but that’s all. Nothing more.

“He sometimes yelled himself into a frenzy. He went hoarse. He spat and vomited. But it was all. Nothing. An empty act. Without character. Without real tension. No heights. Nothing.

“Now, understand, Emil: I am a theater artist — and a pretty damned good one. I am too much of one not to admire any kind of artistry, even in yobs like him. There was nothing there! Nothing! No genuine passion, no humor, no fire, not even the slightest warmth. Nothing. And he said nothing. Not one damned thing beyond the silliest banalities. He gives us nothing.”

“We have to fight him, Emil. Destroy him, you can. But I feel dirty engaging in any way with such a stupid beast, even to do battle with it.”

“None of this has anything to do with me.”

Again, Tucholsky abandoned Germany for Sweden three years before the events of 1933, which handed Adolf Hitler his opportunity to take power. Speaking only German, and feeling like he had lost his country, Kurt Tucholsky died of a drug overdose in 1935.

Some years ago, here in Berlin, I had the chance to ask a question of American performance artist Laurie Anderson. This was in March 2017, just after Donald Trump took office as the American president. Ms. Anderson had been telling … END_OF_DOCUMENT_TOKEN_TO_BE_REPLACED

NOVEMBER 24, 2020 — Market conditions in the United States make it impossible for a small ‘niche’ publisher to produce books at a cost and profit that make it worth trying. Once shipping thousands of books per year — titles … END_OF_DOCUMENT_TOKEN_TO_BE_REPLACED

I was quickly made aware of the fact that there were two kinds of parents buying textbooks at this event. Both types were home-schooling their children, moved by their own disillusion with state public schools. The first kind of parent … END_OF_DOCUMENT_TOKEN_TO_BE_REPLACED

END_OF_DOCUMENT_TOKEN_TO_BE_REPLACED

The Revolution Will Not Be Shared I In this age of Trumpish tyrants, too many of us live and work in places where someone else — boss or client — is neither partner nor comrade, but our “king.” Where we’re … END_OF_DOCUMENT_TOKEN_TO_BE_REPLACED

I just received a message from a longtime Berlin pal, nonfiction filmmaker Rick Minnich, who always seems to be working on something cool and interesting. Rick has lost a friend of his own in March 2020, a 100-year-old fellow in … END_OF_DOCUMENT_TOKEN_TO_BE_REPLACED

I’m currently reading Christopher Clark’s book with the whopping title: Time and Power: Visions of History in German Politics from the Thirty Years’ War to the Third Reich. In it, Clark discusses how the Nazis “changed history” first by changing … END_OF_DOCUMENT_TOKEN_TO_BE_REPLACED

What people might want to remember today is that the US Justice Department has convicted the sitting president’s closest associates — including his attorney and his former election campaign manager — as criminals. They are sitting in prison for financial … END_OF_DOCUMENT_TOKEN_TO_BE_REPLACED

Saturday, Oct. 26, 2019 — I was talking to a dear, old friend of mine some time ago. She was thinking-out-loud about her current work — for a US food processing giant — and comparing it to the work she … END_OF_DOCUMENT_TOKEN_TO_BE_REPLACED