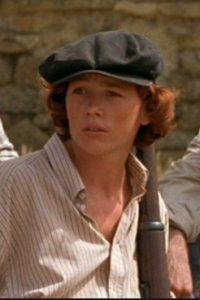 Image from “Land and Freedom,” a film by Ken Loach.

May Day, or International Workers Day, is celebrated as a national holiday in many EU countries, although its historic roots are actually in the US labor movement. Yes, it was a creation of the far left — those rascally globally-minded US socialists, anarchists, and unionists, like Industrial Workers of the World, who were pretty much wiped out by 1920, because of interference by various police and military agencies, collaborating with wealthy capitalist employers.

Historically, left-wing parties and organizations routinely have been cut off from resources, and are *rarely* allowed – or able – to get their act together. Think radical Bernie vs bourgeois Hillary, which is a fairly standard historical model. In “Carla Rising,” for example, I wanted to portray this left-wing divide in the characters of Todd Bryant, on one side, and the more militant Gibbs Bryant, on the other. Carla and her more middle-class mother, Mary, represent people who are necessarily on the left but who are also caught in the middle, to some degree.

While pro-union EU countries and others celebrate International Workers Day as a national holiday, the United States does not. However, this very fine workers holiday COULD be 100% MADE IN USA, where it began in 1886.

On May 1 that year, Chicago unionists, reformers, socialists, and everyday workers ALL COMBINED to make the city the center of the NATIONAL movement for an eight-hour workday. (With only a telegraph key to text their comrades elsewhere about it!)

Between April 25 and May 4, 1886, the Chicago movement took on the look and feel of a revolution. Workers attended scores of meetings (educating themselves) and paraded through the city’s streets at least 19 times.

On Saturday, May 1, 35,000 workers walked off their jobs. Tens of thousands more, both skilled and unskilled, joined them on May 3 and 4. Crowds traveled from workplace to workplace urging fellow workers to go on strike.

Many people adopted the then-radical (but ultimately successful) demand for an eight-hour work day for ten hours’ pay. Police clashed with strikers at least a dozen times, three of them with deadly shootings…. This is part of US Labor History, which too many Americans do not know, a big reason I wrote “Carla Rising,” to include characters who encounter (or cause) labor strike violence from different angles…. (source: chicagohistory.org/)

Some years ago, here in Berlin, I had the chance to ask a question of American performance artist Laurie Anderson. This was in March 2017, just after Donald Trump took office as the American president. Ms. Anderson had been telling … END_OF_DOCUMENT_TOKEN_TO_BE_REPLACED

NOVEMBER 24, 2020 — Market conditions in the United States make it impossible for a small ‘niche’ publisher to produce books at a cost and profit that make it worth trying. Once shipping thousands of books per year — titles … END_OF_DOCUMENT_TOKEN_TO_BE_REPLACED

Reading about events in the United States today, I’m reminded of 1998, when I was working very hard to sell John Alexander Williams’ “West Virginia: A History for Beginners” to schools in the state of West Virginia. As the book’s publisher … END_OF_DOCUMENT_TOKEN_TO_BE_REPLACED

END_OF_DOCUMENT_TOKEN_TO_BE_REPLACED

The Revolution Will Not Be Shared I In this age of Trumpish tyrants, too many of us live and work in places where someone else — boss or client — is neither partner nor comrade, but our “king.” Where we’re … END_OF_DOCUMENT_TOKEN_TO_BE_REPLACED

I just received a message from a longtime Berlin pal, nonfiction filmmaker Rick Minnich, who always seems to be working on something cool and interesting. Rick has lost a friend of his own in March 2020, a 100-year-old fellow in … END_OF_DOCUMENT_TOKEN_TO_BE_REPLACED

I’m currently reading Christopher Clark’s book with the whopping title: Time and Power: Visions of History in German Politics from the Thirty Years’ War to the Third Reich. In it, Clark discusses how the Nazis “changed history” first by changing … END_OF_DOCUMENT_TOKEN_TO_BE_REPLACED

What people might want to remember today is that the US Justice Department has convicted the sitting president’s closest associates — including his attorney and his former election campaign manager — as criminals. They are sitting in prison for financial … END_OF_DOCUMENT_TOKEN_TO_BE_REPLACED

Saturday, Oct. 26, 2019 — I was talking to a dear, old friend of mine some time ago. She was thinking-out-loud about her current work — for a US food processing giant — and comparing it to the work she … END_OF_DOCUMENT_TOKEN_TO_BE_REPLACED